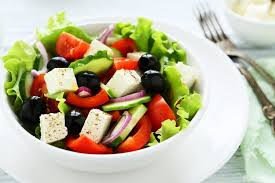 The Mediterranean diet is big in a big way right now, and here’s a dish that’ll be a great introduction to the tenets and styles of classic Mediterranean cuisine. You can get some amazing flavors while enjoying a healthy lifestyle here! The feta cheese on this is easily found in most any store, it’s become popular outside the Mediterranean because its so healthy and flavorful, but its roots in Greece go back much further. In fact a cheese similar to feta is described in the epic poem the Odyssey where a savage giant is described as producing cheese in his cave from sheep or goats milk. Most feta available outside Greece tends to have cows’ milk in it now though, but it’s still brined much as it was when Homer described it nearly three thousand years ago!

The Pepperoncini are delicious mildly hot green peppers that have been pickled, and once you try them you’kll definitely want to keep a jar on hand to use on sandwiches, pizzas, antipasto platters and, of course, salads! The remaining other ingredients are fairly standard and easy to find, you don’t have to use grape tomatoes if you don’t want to, but they’re so much tastier and easier to eat than cherry tomatoes, so I always toss them on a salad if I can, any excuse to enjoy that sweet and tangy flavor they provide! Here’s everything you’ll need.

There’s a bit of debate as to whether a Greek salad should involve greens. Many people see a salad without any leafy matter and find it a bit odd, but the original Greek recipe doesn’t involve any greens. In my version, I like to add them, just to make it more of a salad and less a vegetable crudités platter to the unassuming observer. It also adds some nice ruffage and volume to the salad. You can use all sorts of salad greens but I think baby spinach would be very nice here. Start by filling two bowls with the greens, then add the cucumber and onion slices followed by the crumbled feta. The pepperoncini and olives come next, and then drizzle the dressing over top. Serve chilled