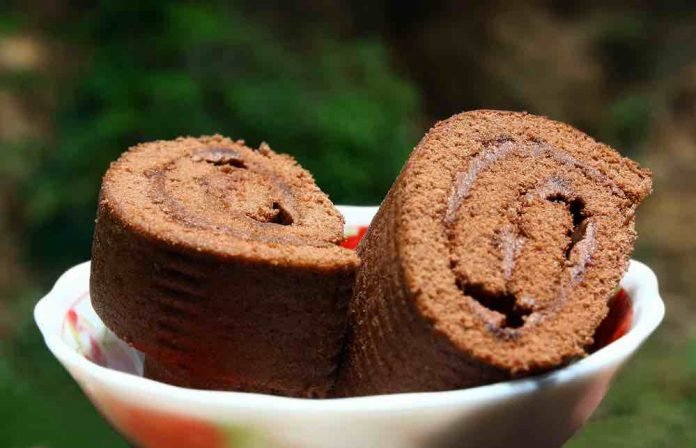 Pushnambu, also called Bibikkan in India, is a traditional Holiday cake among Sri Lanka’s Christian population, who make up around seven percent of the island’s total populace, and have been present on Sri Lanka for well over a thousand years. Indeed it’s said in Sri Lanka that Saint Thomas visited the island at one point to preach to the local populace.

As such it’s no surprise that the local people have found tasty ways to celebrate Christmas and other Holidays with ingredients local to their area. This dessert in particular is made with coconut, coconut treacle, and wheat flour to create a dense, dark cake with delicious flavor. This dessert bears a curious resemblance in some ways to the English Christmas puddings not only in the inclusion of fruit, but also because it’s not meant to be eaten immediately. Tradition suggests it should sit for at least two days to let the flavors blend before being consumed.

Steps How To Make Pushnambu

Line a 12 by nine baking pan with parchment paper and preheat your oven to 275 degrees. Sift the flour and combine with the salt and baking powder.
Heat the treacle in a heavy saucepan and bring to a boil. Add the coconut flakes and reduce heat, allowing it to simmer briefly. Add in the spices and stir, removing from heat and allowing to cool.

Separate the egg whites from the yolks and place the whites into a bowl. Whip them into stiff peaks and set aside. In another bowl fold together the treacle mixture, dried fruit, dates and raisins.

Next, whisk into the treacle mixture the egg yolks, vanilla extract and lemon zest. When combined, add in the flour and semolina. Mix together once again and finally add the chopped cashews. Last, add the egg whites while being careful not to overmix to keep the mixture airy. Pour into the pan and bake for an hour or so, checking for doneness with a fork. Allow to cool in the oven with the door slightly open, then store for at least two days before serving.