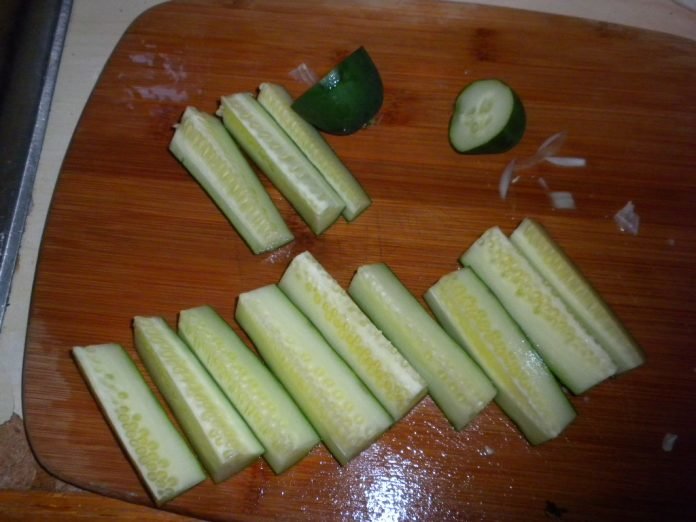 Cucumbers and other vine ripening plants are great in the spring and early summer, but every gardener knows its easy to plant too many and end up with a bunch that you have to try to give to friends and family, the neighbour, your kids friends, ANYONE! Pickling and canning might have been fine for grandma, but who has time for THAT anymore? Turns out you do. Cold, crisp pickles made in the fridge are easy, tasty and super crisp, you’ll love em! Here’s what you’ll need:

1To start off, combine the liquid ingredients om a pot and add the coriander, dried garlic, dried dill, salt, pepper, sugar and red pepper flakes. Bring to a boil and set aside to cool. This mixture will serve as your brine with the salt and the vinegar working to pickle the cucumbers and preserve them. By not adding the brine hot, you can keep the pickles crispy, but it requires them to soak in the brine longer to cure.

2When your brine is cool, start chopping the cucumbers. I like to get the regular, large cucumbers and cut them in half, then cut off the two tips, and slice them into long spears, about 12 spears from each cucumber. You can do yours in medallions if you want or if you get smaller ones you can even leave them whole. Whatever you want to do.

3Now mince the garlic. The dill should be left whole so it wont get everywhere. Layer the cucumbers in a large bowl, a pitcher, or a food safe bucket in a single layer. Add dill and garlic, then another layer of cucumbers, until all the cucumber, dill and garlic is in. Pour over your brine mixture and make sure it covers it. It might be necessary to press the cucumbers into the brine with a plate or something if they float up above the water level.

4Refrigerate the pickles for 3 days at least and then try one. They should come out crispy and flavorful! They’ll last at least a month in the fridge so you’ll have plenty of time to enjoy this cold, crunchy treat!