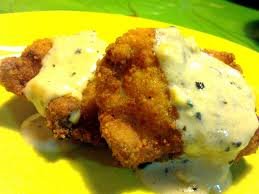 Catfish, in the Southern U.S., is something very special. It is what Trout is to the Appalachian region, or salmon to the Northwest. In the meandering, muddy waters of the Mississippi basin in the Central United States, slippery, whiskered cat fish thrive feeding on the bottoms of the comparatively shallow, slow moving, warm waters. The people there have learned to cook this fish in some truly amazing ways. It’s become such a big part of the local culture, you can go anywhere in the South on a Sunday and you’ll probably find someone doing a fish fry.

You’ll notice that rather than the traditional flour based breader or beer batter, this recipe uses cornmeal, which adds an extra crunch and a certain visual and flavor element to the dish that you just can’t get any other way. It’s also useful for the breading because leftover breading is traditionally mixed with water, green onions and other seasonings to make hushpuppies, or to bread okra to serve with the dish. Traditionally the fried catfish would just be served with a wedge of lemon, but I’ve added a nice sauce to make the dish a little more decadent and special.

Here’s what you’ll need to make it: