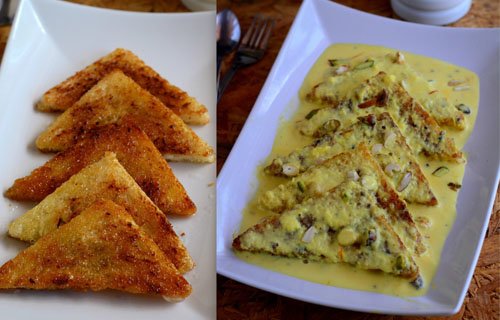 Try this fun Indian recipe as a decadent dessert with ice cream or as a fun new take on French Toast for Breakfast. The whole family is sure to love it! The original Indian version for this is served either as fried bread or as a bread pudding, and it’s called Shahi Tukda, a dessert for special occasions and family gatherings that is associated with royalty, hence the translation of the name.

This is not the traditional Indian dish, which calls simply for fried bread with a cardamom infused cream sauce, but a slightly more substantial Americanized take on it. The Cardamom seeds, which are the main flavoring here, are seed pods popular in Indian cuisine that have a very interesting cool almost minty flavor.

Start by heating the cream, vanilla extract, sugar and half of the cardamom. Cook over medium to medium high heat, a low boil, until it reduces and thickens slightly. Make sure to stir constantly to prevent burning. After 5-10 minutes, cut the heat and allow the mixture to cool.

For the bread, mix the milk, eggs, nutmeg, almond extract and half of the cardamom as you would for French Toast. Heat a non stick pan on medium with either the butter or spray coating. Dip your bread into the mixture and fry it in the pan until golden on both sides.

Stack the toast on a plate and set a scoop of pistachio ice cream on top. Sprinkle with the dried fruit and pistachio crumbles and the reduced cream sauce. Serve hot. This could also be adapted as a breakfast dish.